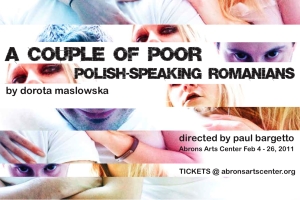 Paul Bargetto directed A Couple of Poor Polish-Speaking Romanians by Poland’s brilliant young novelist Dorota Maslowska at the Abrons Arts Center in NYC in February 2011.  It is a bleak and absurdly funny look at two desperate young people lost in the alien landscape of their own homeland.  In the play, two young Poles, high on speed after an all night binge, pretend to be Romanians and car-jack a terrified driver at knife point for an all night odyssey across the Polish countryside.  The play is  both a nihilistic love story with echoes of Bonny and Clyde and a hilarious critique of modern consumer and television culture.

“And yet as Ms. Maslowska gives voice to the ambivalence of her addled protagonists, stripping away the early histrionics in favor of vulnerability and confusion, the play rewards the stamina required of the audience during the earlier, sweatier scenes. Some young provocateurs wither as the shock value of their work subsides over time and weightier emotions demand to be heard. This raw but talented young writer seems well positioned to survive.” Eric Grode, NY Times

The play was presented at the Abrons Arts Center February 6 – 26, 2011 in a co-production with the Polish Cultural Institute in New York in a New York City premiere.  The translation was by Benjamin Palof, starring Troy Lavallee (Blighty) and Robin Singer (Gina) with Nora Wooley, Herbert Go, Robert Saietta, Amanda Broomell, Stephanie Shipp, and Steven Conroy. Set and Costumes by Doris Mirescu, Video by Patrick Flynn and Marcin Nowak, Music by Lukasz Szalankiewicz and AABZU.

4 thoughts on “A Couple of Poor, Polish-Speaking Romanians”

This site uses Akismet to reduce spam. Learn how your comment data is processed.